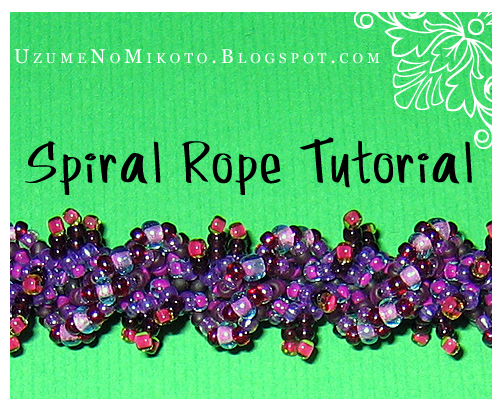 The Spiral Rope is another of the major off-loom beadweaving stitches. It has a very simple structure that can be modified to create all kinds of beautiful spirals, and it is often used to create bracelets and necklaces.
Here's how you do it!

You will need:
Beads (I usually use a combination of size 11 and size 8 seed beads, but I'm using just 8s for the tutorial)
A needle
Thread
A spiral rope has two major components: the spine, and the loops. The ratio of one to the other decides how the finished rope will look. For example, if you have a very short spine component with a very large loop, you'll come out with a big, soft spiral. If your loop is only slightly larger than your spine component, you'll end up with a slim, tight spiral. I suggest that you use an odd number of loop beads: there are more finishing possibilities that way.
As shown, I'll be using a three spine bead to five loop bead ratio. 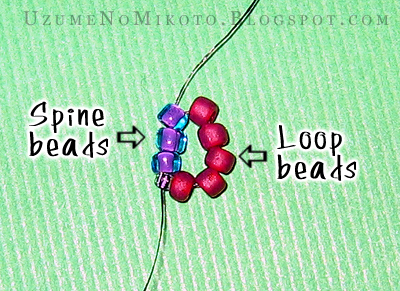 Start by threading a tension bead and passing back through it again. 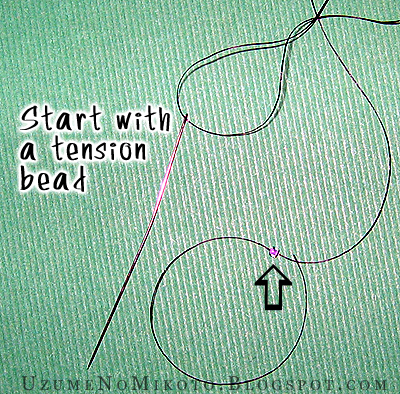 Add three spine beads: they will be your first spine component. 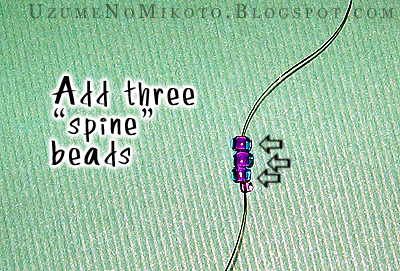 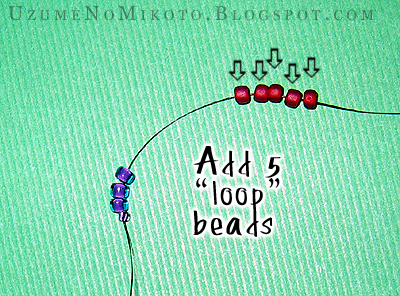 To actually create the loop, pass upwards through the three spine beads you have on your thread. 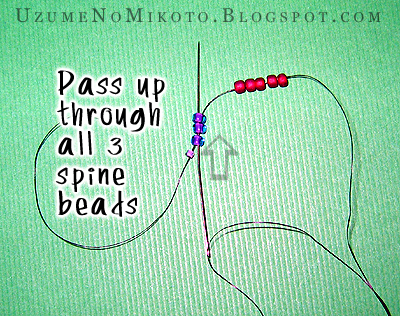 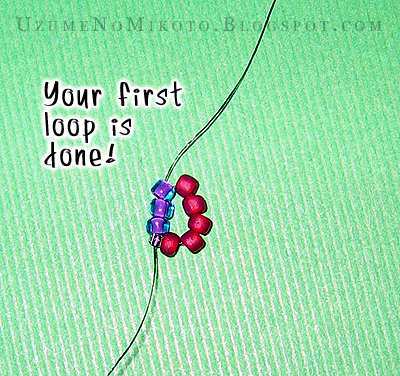 Time to get ready for the second loop. To do so, thread on one spine bead. 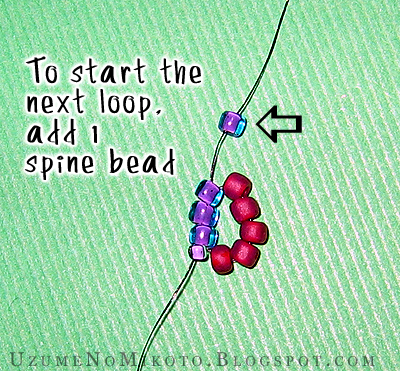 Now, add on 5 more beads: they'll be your second loop. 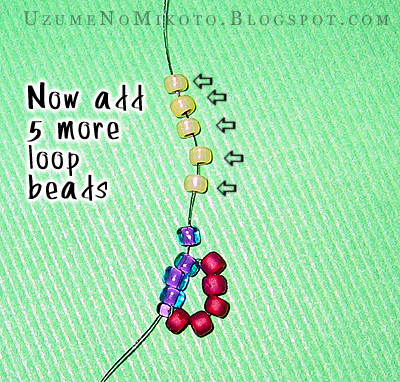 OK, now we need to make the second loop. To make it look the same as the first loop, we need a ratio of 3 spine beads to 5 loop beads, right? So pass your needle upwards through the top three spine beads. 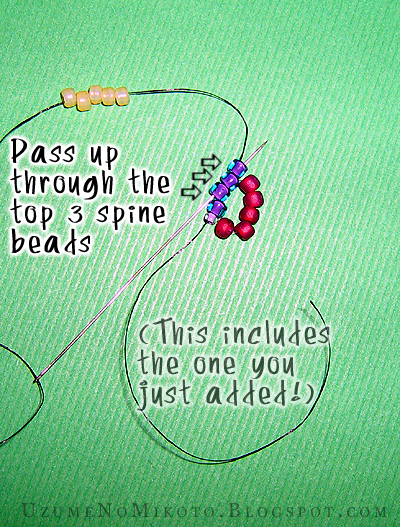 Two loops down! Not so bad, right? 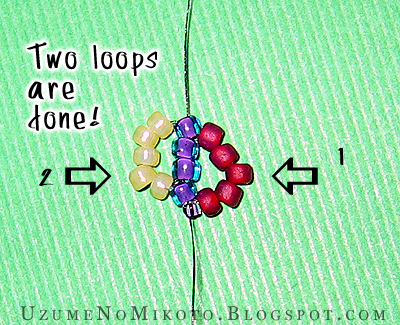 As with the last loop, start loop 3 by threading on one spine bead. 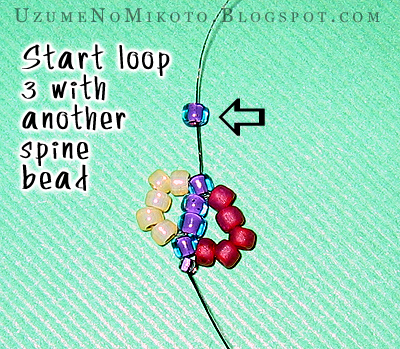 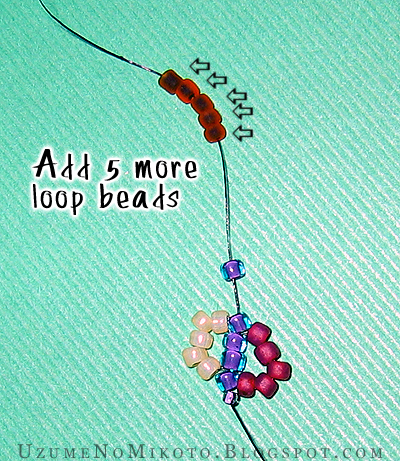 Next, as you can tell, you need to pass upwards through the top three beads. Not a problem, right?

One important thing to keep an eye on, as you get to loop 3, is to make sure you are creating a spiral. Spiral rope is just a bunch of loops around a central spine: it only spirals because you tell it to. The way to tell it to spiral counterclockwise (which is what I'm doing here) is to make sure you create each new loop directly to the left of the previous loop. If you hold your work vertically and look down, you should be able to see each new loop added on in a counterclockwise direction. 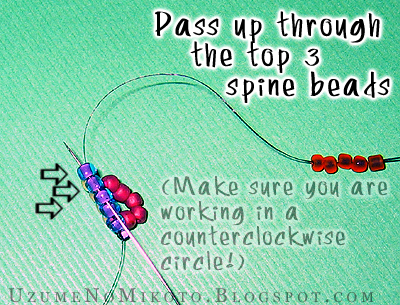 OK, you're done with three loops! See how it's starting to spiral? 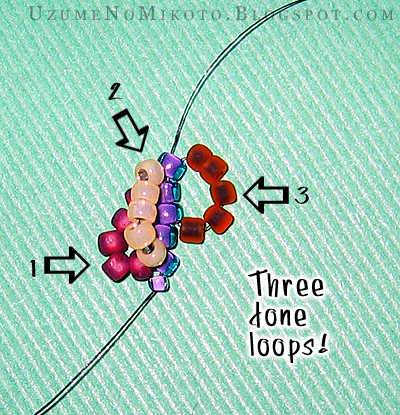 Repeat Loop 3 over and over again until the spiral rope is as long as you want it to be, making sure you keep adding each new loop in a clockwise direction. 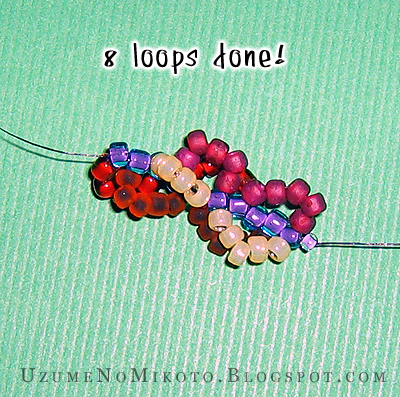 Here I have a short spiral rope of 8 loops. ...Yeah, it doesn't look to impressive, does it? Well, one way to define the spiral better is to add what I like to call "frill" beads. Frill beads connect the middle bead in each loop (remember when I mentioned to use an odd number of beads per loop?), and you can use any kind of bead you like. I'm just going to use some blue size 8s. Frill beads are totally optional, but I like the way they give shape to the spiral.

To start adding frill beads, pass back down through the top three beads of the upmost loop. 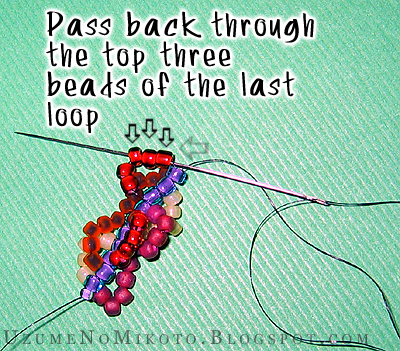 String one one frill bead. 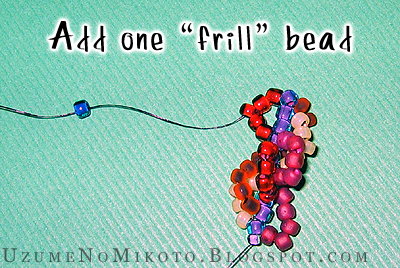 Find the second-highest loop: pass your needle down through the middle bead of that loop. 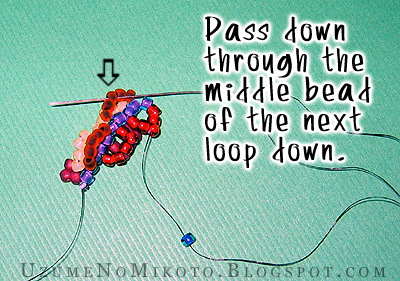 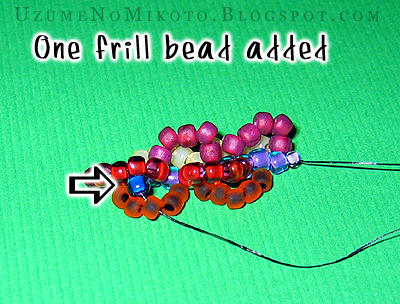 To add another one, string one frill bead, then pass your needle down through the middle bead of the next loop down. Repeat until you get back down to the very first loop, and you're done! 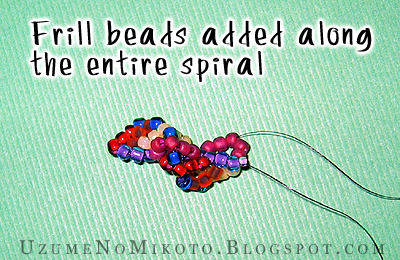 Here's the thread path while the piece is still 2D (a 3D threadpath would be beyond my capacity in a 2D graphics program!). As you can see, the stitch is just a bunch of beaded loops added to a vertical central spine. 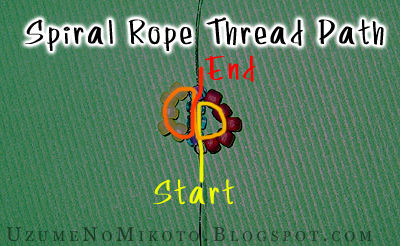 Variations! And oh, there are many. 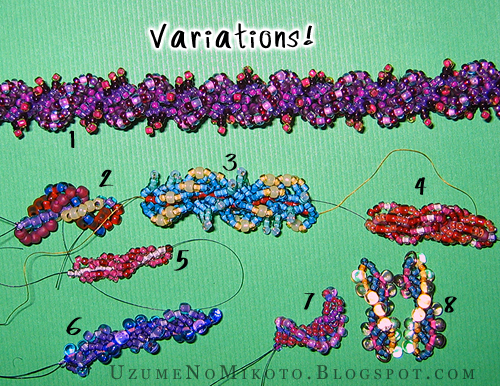 Variation 1 is the bracelet that caused me to give up spiral rope for a couple of years the second that I completed it. It's so pretty, but I was so new to the technique I kept messing it up and having to redo sections of it... proof that you need a -smaller- project when you've just started working with a new technique! It uses size eights as core beads and mostly size 11s for loops. It's an example of double-spiral-rope, where you make two (differently-colored-and-shaped) loops per spine component.

Variation 2 is from this tutorial, size eight seed beads with a 3:5 spine to loop ratio.

Variation 3 is a differently-colored version of Variation 1, a double-spiral.

Variation 5 is all size 11 seed beads, with a ratio of 3 spine beads to 4 loop beads.

Variation 7 is a little more unusual, but I love the pronounced spiral. It has an approximate ratio of three spine size 11 seed beads to 4 size 11 loop beads: but in this case, the loops are more like spikes (to create a spiky loop like these, string four beads, pass down through the third, add two more). I used size 8 seed beads for the frill. I'll cover spiky loops and double-spiral rope in the forthcoming Spiral Rope: Advanced tutorial.

Variation 8 is a pair of earrings where I used drops for both the spine and the frill.

There you go! I hope you enjoyed this tutorial, and I hope you try it out, because spiral rope is a lot prettier in person than it is in 2D pictures.
Posted by Uzume at 5:33 PM

Uzume
I go by Natalie, or Uzume, or Shishiko, or any number of other aliases, depending on my mood or situation. I think dachshunds are the most perfect creatures to walk the face of the earth; I love stylized Chinese Lions; if I can play with color, I will generally be happy.